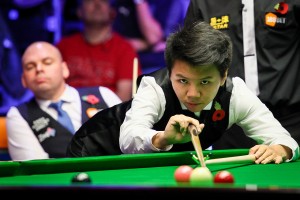 Zhou Yuelong pulled off a huge shock by coming from 3-1 down to stun World Champion Stuart Bingham 4-3 in the opening match of the 2015 188BET Champion of Champions at Coventry’s Ricoh Arena.

The Chinese teenager, who qualified for this event by winning the World Cup in June, came flying out of the blocks on his debut in a major UK-televised event with a break of 68 in the opening frame, but Bingham responded by rattling off the following three frames to move one away from victory.

Zhou held his own, though, taking the next two before knocking in a 62 in the decider to complete a sensational win and book his place in tonight’s Group Three final, where he will play either Judd Trump or Kyren Wilson.

The 17-year-old made a very confident start as he knocked in a solid break of 68 to take the first frame.

He was in again in the second after capitalising on a loose safety shot from Bingham, but missed a tough red along the bottom rail and the world number two punished him with a run of 40 to the pink to level the match. 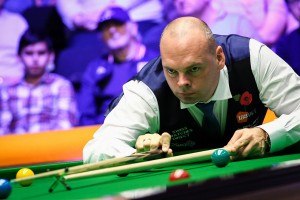 The 2013 finalist took full advantage of another loose shot from the 17-year-old in frame three, making a 55 on his way to taking the lead for the first time.

Bingham continued to pick up the pieces left by his opponent, who missed a red to the bottom corner with the rest, and quickly rattled in a break of 44 to move one frame away from victory.

Zhou, whose best run this season came when he reached the last 16 of the International Championship, kept his hopes alive by eventually taking a scrappy fifth frame after tying Bingham in a difficult snooker behind the brown.

Bingham was looking good to prevail before missing a red to the bottom left corner, allowing Zhou back in to bring proceedings level once more and set up a decider.

Although a heavy underdog for this game, Zhou will have fancied his chances given the fact that his opponent has lost all three of his matches that have gone to a final frame this season.

He took his opportunity when it arrived as he knocked in a break of 62 to wrap up the victory and compound more misery on Bingham, whose poor start to the campaign continued. 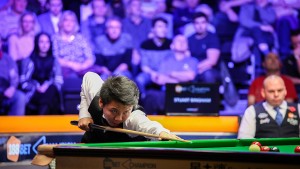 “I have been 3-1 up a few times in PTC events, against John Higgins and Fergal O’Brien and the same thing has happened,” said Bingham. “I played one bad frame there where I let him have a chance but in the last frame he pulled out a cracking red and made a good 62.

“I am getting on the wrong side of deciders at the moment. I was thinking about it at 3-1. I had a chance, went into the pack and didn’t land on anything so played a safe shot and he has potted a good long red.

“What Zhou did in the last frame just shows you what a great talent he is. He is 17 and him and Yan Bintao won the World Cup, so he is rightly here. I produced when he needed to today.”