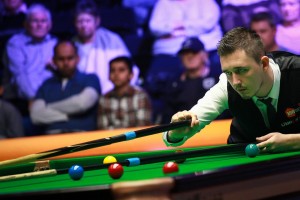 Kyren Wilson produced the second upset on the opening day of the 2015 188BET Champion of Champions, knocking out tournament favourite Judd Trump 4-2 at Coventry’s Ricoh Arena.

The Shanghai Masters champion produced some very solid snooker with top runs of 78 and 50 to secure his place in the Group 3 final, where he will play Stuart Bingham’s conqueror in Zhou Yuelong.

In a repeat of the final in Shanghai which Wilson won 10-9, he drew first blood in the opening frame before a 32-minute second saw Trump level.

Runs of 38 and 37 from the Kettering cueman moved him back in front on his debut in his local tournament, however his opponent responded by knocking in a cracking long red and going on to make a break of 104 – the first century of this year’s event. 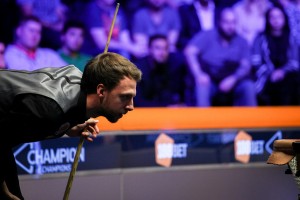 Trump, who reached the final here last year, then shot himself in the foot in frame five by significantly under-hitting an attempt at a snooker behind the brown before a wild lash from his escape.

This allowed Wilson to rattle in a 78 to move one away from victory.

The 23-year-old had lost the two previous meetings over seven frames against Trump by four frames to two, but he wasted no time in returning the favour as a solid run of 50 was enough to close out his second win over ‘the Ace in the Pack’ in the space of two months.

“It is never easy playing somebody like Judd because he can blow you off the table,” said Wilson. “I had to play my own game and forget about his and I got over the line. 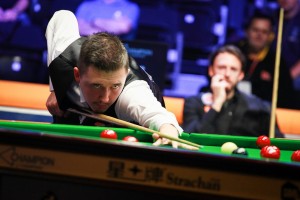 “I don’t think the Shanghai Masters final gave me any psychological advantage because everybody understands that anybody can beat anybody else nowadays.

“The thing that pleased me the most was when Judd made a century and I responded straight away. I think that is one of my strengths, being able to respond to big breaks. To respond to that and win the last two frames I was very happy with that.

“Coventry is 40 minutes down the road from me so this is perfect. It is a fantastic venue and I had great support.

“I don’t think it matters who you play. Zhou has just beaten the World champion so he can obviously play.”