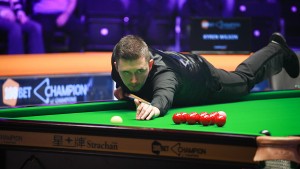 Kyren Wilson became the first player through to the 188BET Champion of Champions semi-finals with wins over Judd Trump and Zhou Yuelong at the Ricoh Arena in Coventry on Tuesday.

Wilson defeated last year’s tournament finalist Trump 4-2 in his Group 3 semi-final to set up a clash with Chinese youngster Zhou Yuelong, who had stunned World Champion Stuart Bingham in the deciding frame of their semi-final to reach the best of 11 group final.

Just like he had in his victory over Bingham in the afternoon session, Zhou came flying out of the blocks with a run of 85 to take the opening frame but Wilson responded with an 84 to level.

The 17-year-old looked on course to take frame three after a good long red to the green pocket, but missed a tricky yellow and Wilson capitalised with a 78 to move in front for the first time.

He eventually took it on the pink after Zhou’s attempted safety on the brown caught the jaw of the left middle pocket and left it perfectly near the opposite centre.

The World Cup winner hit back with a strong run of 87 to half the deficit, but a 57 saw Wilson quickly restore his two-frame advantage.

A good split on the reds from the blue appeared to put the Kettering cueman on the front foot in frame seven, but a missed red immediately afterwards saw Zhou waste no time rattling in a break of 68 to close the gap to just a single frame once more.

Wilson again extended his advantage with the help of a 49 break in frame eight, with Zhou conceding needing two snookers, and the Kettering potter made it to Saturday’s semi-final stage taking the ninth frame for a 6-3 success.

“It got a little bit scrappy towards the end but that is understandable,” said Wilson. “I was pleased to get over the line. Zhou is a great talent and he looks like a very good player.

“Coventry is 40 minutes down the road from me so this is perfect. It is a fantastic venue and I had great support; it was fantastic to have my family and friends here.

Earlier, Wilson had dumped tournament favourite Judd Trump out of the competition with a 4-2 victory. The Shanghai Masters champion produced some very solid snooker with top runs of 78 and 50.

In his group semi-final Zhou had stunned the tournament with a 4-3 victory over World Champion Stuart Bingham. The Chinese teenager made a confident start with a break of 68 in the opening frame, but Bingham responded by rattling off the following three frames to move one away from victory.

Zhou held his own, though, taking the next two before knocking in a 62 in the decider to complete a sensational win.

“I have been 3-1 up a few times in PTC events, against John Higgins and Fergal O’Brien and the same thing has happened,” said Bingham. “I played one bad frame there where I let him have a chance but in the last frame he pulled out a cracking red and made a good 62.

“I am getting on the wrong side of deciders at the moment. I was thinking about it at 3-1. I had a chance, went into the pack and didn’t land on anything so played a safe shot and he has potted a good long red.

“What Zhou did in the last frame just shows you what a great talent he is. He is 17 and him and Yan Bintao won the World Cup, so he is rightly here. I produced when he needed to today.”