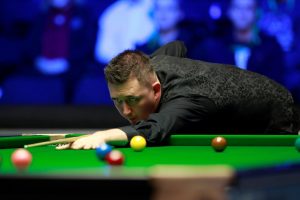 Kyren Wilson defeated Mark Williams and Judd Trump, losing just one frame to each, as he fired himself into the semi-finals of the ManBetX Champion of Champions at Coventry’s Ricoh Arena.

The Warrior first beat World Champion Williams 4-1 to set up the Group Three final against Trump, who had beaten Brecel by the same score in his semi-final. In the best-of-11 final Wilson led 3-1 at the mid-session and really found his stride after the interval.

A 125 in the fifth frame was followed quickly by a 131 in the sixth. Wilson looked to have offered Trump a lifeline in the next frame when he missed a black but the Bristol man was unable to capitalise and Wilson was back at the table to clear for victory soon after.

“I was solid against Mark Williams but I felt I needed to up it a bit tonight because Judd is a very heavy scorer,” said Wilson after booking his place in the semi-final.

“I felt I needed to up my pace a little bit and I did that and scored very heavily, so I am very pleased with tonight’s performance.

“I think I have had a good season so far, I have won back-to-back events and been on a run where I didn’t lose a match for a long time. When you do that early on in the season it does start to relax you ready for the rest of the season. It is a very busy calendar with lots of events and it has eased me into the season, which is probably why I am producing my best form now.

“I’d like to think that anybody in this tournament is a contender; it is the Champion of Champions so everybody has won an event and I feel like I am in with a shout.”

Wilson will play the winner of Group Two, which place on Thursday. Mark Selby will be up against Neil Robertson before Barry Hawkins plays recent International Championship winner Mark Allen, with play beginning at 1pm.