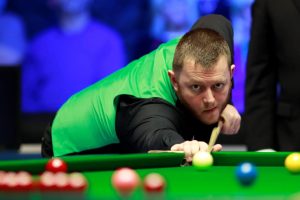 Mark Allen was in impressive form as he beat Barry Hawkins 4-2 and then Neil Robertson 6-1 to set up a ManBetX Champion of Champions semi-final clash with Kyren Wilson.

Allen arrived in Coventry on the back of winning the International Championship in Daqing, China on Sunday and maintained his form as he made five century breaks – two against Hawkins and three against Robinson – at the Ricoh Arena.

Allen had beaten Robertson to win the International Championship just four days earlier and rematched the Thunder From Down Under after the Australian had beaten Mark Selby 4-3 in his group semi-final, despite the World No.1 making a 147.

Allen led the group final 3-1 at the interval with the help of breaks including a 119 and a 102. The Pistol continued his unrelenting pace after the break with a 123 and a 90, before confirming his place in the last four with a 75 in the seventh frame.

“The first frame was a bit scrappy but after that I didn’t really put a foot wrong,” said Allen. “I scored really well like I have been doing for a while now and limited Neil to half chances really.

“Ronnie had six centuries on Tuesday so I was disappointed I missed out in the last two frames because I had a great chance to make seven! My game is in good shape but I’m not getting carried away, I am only in the semi-final and I have two very tough matches to get through if I am going to win this tournament but I quietly fancy my chances.

“I feel like I owe Kyren one because he beat me in the Worlds this year but we always have good matches, we are two good players and the best man will win on the day.”