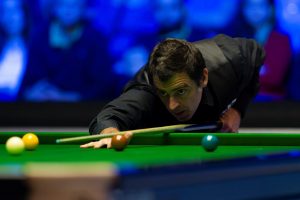 Ronnie O’Sullivan will meet Shaun Murphy in the ManBetX Champion of Champions semi-finals after beating Stuart Bingham and John Higgins to progress from Group Four of the event at Coventry’s Ricoh Arena.

O’Sullivan won the first two frames of the group final but Higgins took a 3-2 lead with breaks of 91, 70 and 83. ‘The Rocket’ responded with three consecutive frames of his own, including two century breaks; 101 and 137 to get to within one of the match. A 114 in the ninth frame, his sixth century of the day, saw O’Sullivan through to the last four of the ManBetX Champion of Champions for a fifth time where he will meet defending champion Murphy in a repeat of last year’s final.

“I scored alright tonight so I won a lot of frames in one visit, which was good,” said O’Sullivan. “Sometimes it is irrelevant who you are playing if you keep clearing up, it is a much smoother match.

“You try to play your best game all the time but against John, him and Hendry are the best players that I have ever played and you know you have to play brilliant and sometimes no matter how well you play you can sit in your chair for five, six, seven or eight frames and not get a shot. You’re always aware that could happen at any moment.

“[Before the semi-final] I will take it easy, relax, cook some food, go to the gym, do some running, watch a bit of snooker and take it easy.”

Earlier O’Sullivan had beaten Bingham 4-2 in the group semi-final while Higgins had beaten Ryan Day 4-3. The ManBetX Champion of Champions continues with Group Three on Wednesday. The semi-final fixtures are Mark Williams vs. Kyren Wilson followed by Judd Trump vs. Luca Brecel.