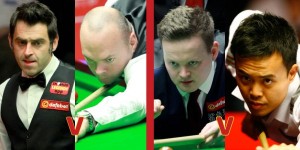 Ronnie O’Sullivan launches the defence of his Dafabet Champion of Champions title on Wednesday, with Shaun Murphy, Stuart Bingham and Marco Fu also in action on ITV4.

The Rocket will break off Group 1 against Bingham in a repeat of last year’s final at the Ricoh Arena at 1pm.

O’Sullivan has endured a fairly slow start to the season, with his best run coming last week when he reached the quarter-finals of the International Championship.

The defending champion is looking to kick-start his campaign against the man he beat 10-8 in this event 12 months ago. During his post-match interview after that final, the Rocket highlighted how he continued to attack with the scores at 8-8 while his opponent tightened. He will be hoping that piece of advice doesn’t come back to bite him.

The defending champion is 5/2 with Dafabet to retain his title this week.

Bingham has certainly taken it on board as already has two titles under his belt so far this season – the Shanghai Masters and the Asian Tour’s Haining Open.

He beat the likes of Judd Trump and Mark Selby en route to the final in Coventry last year, and is looking to go one better this time around. He is 243/100 with Dafabet to beat O’Sullivan.

The winner will face either Murphy or Fu in the group final at 7pm, with both players looking for their first victory in the event having fallen at the first hurdle last year.

Murphy qualified as the winner of the World Open and has also added the Bulgarian Open to his collection this campaign, as well as reaching the quarter-finals of the Wuxi Classic.

He beat Fu during this year’s World Championship before being swept aside by O’Sullivan in the quarter-finals, and he will certainly jump at the opportunity to set the record straight if he gets the chance this week. He is 16/1 with Dafabet to be crowned Champion Of Champions.

Fu, the world number nine, is here as the highest ranked player not to have landed a piece of silverware.

He comes into this event in good form though having reached the quarter-finals in Chengdu last week, while he has also reached the last eight in Wuxi and the Riga Open so far this season. 33/1 says he will land his first title of the year this week.

All the action will be broadcast live on ITV4.

Trump reaches semis at a canter