TRUMP BLASTS PAST UN-NOOH TO SET UP ALLEN SEMI 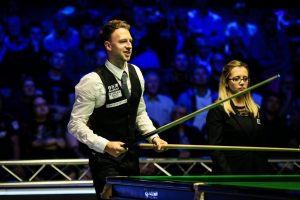 Judd Trump defeated Thepchaiya Un-Nooh 6-3 in the ManBetX Champion of Champions Group 2 Final to set up a semi-final clash with Mark Allen at the Ricoh Arena, Coventry.

Trump had earlier beaten Stephen Maguire 4-0 in his group semi-final and was the same score ahead of Un-Nooh at the mid-session interval in their best-of-11 group final.

The match was a repeat of Sunday’s final of the Yushan World Open, which Trump won 10-5, the sixth tournament he had won in the last 12 months.

The World No.1 made a flying start but after the break Un-Nooh fought back. A 73 reduced the deficit, but Trump looked on the verge when he took the sixth with a 89 to go 5-1 up. His Thai opponent, though, wasn’t going out without a fight and closed the gap to 5-3 before Trump completed the victory with a 71 break in the ninth.

“I felt good towards the end of the match,” said Trump. “I had a big lead at the interval and a couple of things didn’t go my way towards the end, but I always felt if I had a chance I would take it.

“Recently I have been getting off to good starts and putting opponents under pressure and that was the same today. He was missing a few more than he normally does and I was able to pounce on his mistakes.

“I stayed pretty confident. If it had gone 5-5 I would have been under pressure but I knew I would get another chance and I had the belief I would take it. I have a lot of confidence from the win in Yushan and I am bringing that into this event.

“I saw a little bit of Mark Allen’s match last night. He is an attacking player, I think the table will suit him because it is very, very fast out there and with his cue action that will suit him. It will be a tough semi-final and I’ll have to improve my game from how I played today.”

The group phase of the ManBetX Champion of Champions concludes on Thursday as Ronnie O’Sullivan faces Jimmy White before John Higgins takes on Stuart Bingham.