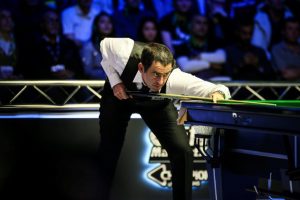 Ronnie O’Sullivan beat John Higgins and Jimmy White to set up a ManBetX Champion of Champions semi-final against Neil Robertson at the Ricoh Arena in Coventry.

O’Sullivan has reached the final of this event every time he has played it and will now meet ‘The Thunder From Down Under’ in Friday’s best-of-11 semi-final after coming through Group 1 on Thursday.

The Rocket had survived a Whirlwind-sized scare as he came from 3-0 down against World Seniors Champion Jimmy White to win 4-3 in a match that will live long in the memory for the sold-out Ricoh Arena crowd. He then met Higgins in the group final after the Wizard of Wishaw had beaten Stuart Bingham 4-2 in his group semi-final.

The first six frames of the best-of-11 group final where shared between O’Sullivan and Higgins but from there it was dominance from the defending champion. A break of 85 took O’Sullivan ahead and he extended his lead to 5-3 in the eighth before closing out the match in the next frame.

“I didn’t play great but I don’t think John played well,” said O’Sullivan. “If John is on form I don’t like playing him, when he is on form he is your worst nightmare. I will go out there tomorrow, have a bit of fun and try and get my shot clock down to 10 seconds if I can. It is a good venue and a good table.”