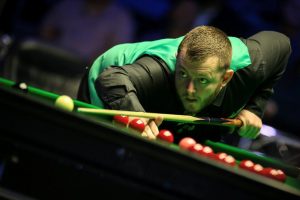 Mark Allen beat Mark Selby 6-2 in the Group 3 final to book his place in the semi-finals of the ManBetX Champion of Champions at Coventry’s Ricoh Arena.

Eight of the ten previous encounters between Allen and Selby had gone to a decider and this one looked to be heading the same way at the mid-session, when the scores were level at 2-2.

However, Allen, who was also a semi-finalist of this event in 2016 and last year, took control after the interval. A 65 saw him take the fifth frame and in the next Selby missed a pink at 50-10 ahead. Allen wasn’t able to take immediate advantage, but he did take the frame for a commanding lead.

A 51 in the next took Allen to within one of the match and he sealed it in the eighth to set up a semi-final clash with the winner of tomorrow’s Group 2, which features Judd Trump vs Stephen Maguire and Kyren Wilson vs Thepchaiya Un-Nooh.

“I feel like I played well enough to win 6-2 but a lot of the frames were a bit drawn out,” admitted Allen. “I think I was good value for the 6-2 win but it could have been different if a few snookers went his way towards the end.

“I was thinking at 5-2, if this goes 6-5… but you can’t help thinking that when you’ve had seven best-of-11s go the distance. I had a really good mental attitude tonight. I think what happened in the afternoon I think helped me tonight because I lost focus a little bit earlier when I should have really won 4-0.

“I was fully focused tonight and there were no lapses of concentration at all, and maybe that was the difference. I needed that fourth frame because the way I lost the second frame in particular, making a 70 and losing the frame, you don’t do that often. If I had have been 3-1 down at the interval I would have been kicking myself so to dig deep and win that fourth, I felt it could have been better and 3-1 up but I was over the moon to be 2-2 and very confident.

“I’d love to see Stevie get through tomorrow. He is one of my best mates on tour but it is going to be tough, there are four cracking players. Thepchaiya is the man of the moment apart from Judd, got to the final last week and won an event behind closed doors which you probably haven’t heard about.

“Kyren and Judd have had some great battles but I think Maguire might have something to say tomorrow. But I don’t really care who I play; if I am going to go on and win the tournament it would be nice to beat the World Champion and World No.1 on the way.”