CHAMPION OF CHAMPIONS RETURNS TO COVENTRY 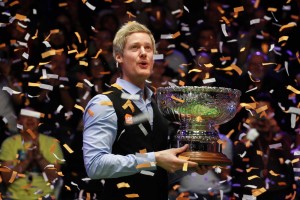 Snooker’s Champion of Champions returns to Ricoh Arena, Coventry this November 7-12, with tickets on sale from midday on Monday, April 18.

With the likes of defending champion Neil Robertson, China Open winner Judd Trump and World Grand Prix victor Shaun Murphy all eligible to compete, and 2013 & 2014 Champion of Champions winner Ronnie O’Sullivan having already confirmed his participation as regaining Masters and Welsh Open champion, the tournament is set to continue to build on its status as one of the sport’s most exciting events.

Broadcast throughout by ITV4 in the UK and on networks around the world, the Champion of Champions moves into its fourth year and pits tournament winners from the previous 12 months head to head for the prestigious title and the £100,000 winner’s prize.

The action gets underway on Monday, November 7. The tournament starts with a quartet of four-man groups, with one group played out on each of the first four days. The draw and fixtures for the group stage will be announced in the autumn.

The four group winners proceed to Friday’s semi-finals before the final takes place over 19 frames and two sessions on Saturday, November 12.

Tickets go on sale at midday on Monday, April 18 from www.championofchampionssnooker.co.uk, with an early bird offer pricing tickets at as little as £5.50. Premium tickets are available for all sessions with VIP Hospitality tickets on sale for the semi-finals and the final.

Qualifying events take order of precedence with the 16 major tournaments on the World Snooker schedule in the first group of events. The second group comprises four Euro Tour events and the final group has the three tournaments – the Shoot Out, World Seniors and Six Reds.

The full list of qualifying events can be found at www.championofchampionssnooker.co.uk.