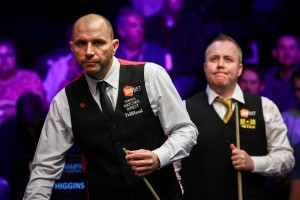 Joe Perry won through to the 188BET Champion of Champions semi-finals after beating John Higgins in a 11th frame decider in Wednesday evening’s Group 1 final.

Neither player had established more than a one-frame lead in the match but Perry came from 5-4 down to seal victory at Coventry’s Ricoh Arena. 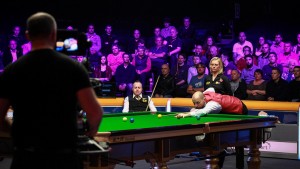 Perry will meet the winner of Thursday’s Group 4, which sees Neil Robertson play Rory McLeod and Shaun Murphy take on Yan Bingtao in the afternoon session, with the two winners playing off in the evening.

Higgins came into the tenth meeting between the players having won eight of the previous nine and he took the opening frame here with a run of 40 along the way.

Perry’s only previous victory against the four-time World Champion came in the forerunner to this event in the 2008 Premier League and he levelled with a cool 41 clearance, before nudging himself in front after a quick-fire break of 75. 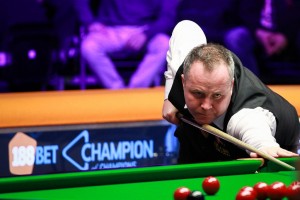 Higgins, who has already won the Australian Open and International Championship this season, bounced back by winning a lengthy safety battle in the fourth frame, before going on to make a 66 to level things up at the interval.

Another hard-fought frame went the way of the Scot after the break, as a loose escape by Perry allowed him to move 3-2 up on the colours.

The Players Championship Grand Final winner responded brilliantly, however, with a quality clearance of 112 to bring the match all square and an equally impressive run of 85 saw him regain the lead.

Higgins then moved to within one of victory but a cool run of 87 saw the resolute Perry force the decider.

And it was the world number ten who had the first opportunity of the 11th rack, but a kick left a frustrated Perry out of position and his run was cut short at 32.

He was offered a reprieve, however, when Higgins left him a cut-able red to the top right corner pocket which began a run of 30, and when Perry next potted a red and followed up with the pink his progression to the tournament semi-finals was assured.

“I thoroughly enjoyed that match,” said Perry. “It was a good game, I felt comfortable, played probably as well as I have against John and I am absolutely delighted to beat somebody of John’s class.

“I felt comfortable and confident and stayed positive even when John threw some good stuff at me. I kept believing I was playing well enough to win, a few little things went my way towards the end and I capitalised.

“Sometimes you don’t really feel it but tonight from frame one I felt comfortable and positive. It didn’t mean I was going to win but my demeanour didn’t change even at 5-4 down.

“I will watch tomorrow’s group because my buddy Neil Robertson is playing and I will be routing him on. I normally watch snooker anyway but I will have more of a keen eye on it tomorrow.”

In the day’s afternoon session Higgins recorded his first 188BET Champion of Champions win after recovering from an early scare to round off a 4-2 victory over Ali Carter.

Higgins was sat in his chair as Carter came flying out of the blocks with a stunning 128 clearance in the opening frame, but produced hard, competitive snooker to reel off four of the next five frames and secure his passage to the Group 1 final.

Perry had earnt his passage to the evening session after beating Michael White 4-2 in a battle of Coventry debutants.

‘The Gentleman’ had narrowly missed out in qualifying for each of the first two Champion of Champions tournaments, but made up for lost time with breaks of 68 and 66 on his way to victory.