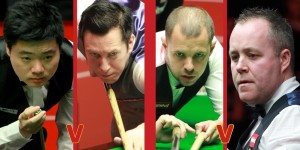 The 2014 Dafabet Champion of Champions gets underway on Monday with Ding Junhui, Barry Hawkins, John Higgins and Dominic Dale all in action on ITV4.

The tournament breaks off at the Ricoh Arena in Coventry with the Group 4 semi-final between Ding and Dale at 1pm.

Asia’s most successful player of all time, Ding earned a piece of snooker history in 2013/14 as he became the only player other than Stephen Hendry in 1990/91 to win five world ranking titles in a single season.

He hasn’t added to his haul so far this season, with a semi-final appearance at the Shanghai Masters his deepest run in a tournament. However, he remains one of the most fancied players here this week and can be backed at 15/2 with Dafabet.

He faces Dale, who makes his debut in the Dafabet Champion of Champions on the back of success in the one-frame, fast-action Shoot-Out in January.

Though a Welshman, Dale was actually born in Coventry. One of snooker’s most flamboyant characters, he enjoyed a run to the quarter-finals of this year’s World Championship. However, he is considered an outsider for this event, with Dafabet offering 80/1 that Dale lifts the trophy on Sunday.

The winner of that match will face the victor of Hawkins’ clash with Higgins at 7pm.

Undoubtedly Hawkins’ best moment of the 2013/14 season was winning the Players Championship at the Guild Hall in Preston. It was the second world ranking title of his career and landed him an invite to this week’s competition.

The Kent cueman has enjoyed two semi-final appearances already this season and is a 20/1 shot with Dafabet to be crowned Champion of Champions this week.

His first challenge is to beat Higgins, the four-time Crucible King who is back for another shot at the Dafabet Champion of Champions having lost his group semi-final in 2013.
The Scot hasn’t made the start to the 2014/15 season he would have liked. He made the quarter-finals of the Six Reds World Championship but otherwise the Australian Open has brought his only last-16 appearance of the campaign so far. He’s available at 30/1 with Dafabet for the tournament win.