Higgins is Dafabet Champion of Champions 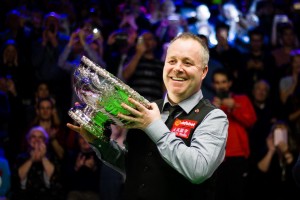 John Higgins is the 2016 Dafabet Champion of Champions as he held off Ronnie O’Sullivan to take the title by 10-7 at the Ricoh Arena, Coventry.

As well as the magnificent trophy, the Scotsman took the £100,000 top prize making it a highly lucrative eight days following victory and a £200,000 winner’s cheque at the China Championship last weekend.

It was O’Sullivan’s first defeat in the four-year history of the Dafabet Champion of Champions – he was a winner of the event in 2013 and ’14 but didn’t compete last year. The Englishman was leading 5-4 after the afternoon session, but Higgins got the better of the evening exchanges, levelling the match at 7-7 and then pulling away with three frame winning breaks to take victory.

“This is the 16 best players in the world each year, because they have won tournaments,” said Higgins. 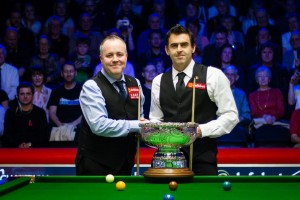 “I am delighted to put my name to that list of Champion of Champions winners; it has been a good two weeks and you have to roll with it when it is going for you,” he added.

The match was always likely to be one of the highest quality and the afternoon session saw eight of the nine frames decided by breaks over 60. Following the restart in the evening Higgins seized the initiative as breaks of 60 and 63 saw him take the lead at 6-5.

It was nip and tuck as O’Sullivan levelled with a 74 before Higgins regained his lead at 7-6 with a run of 83. The Rocket though, produced a magnificent run of 130 – the highest of the match – to once again leave the match finely poised at 7-7.

Higgins, playing some of the best snooker of his illustrious career won the next two in quick succession with breaks of 76 and 86 to put himself on the way from victory. That came in the next despite two misses where the balls fell in his favour, breaks of 40 and then 58 delivered the win.

“I can’t speak for Ronnie but I was buzzed up coming into play. I just wish my old man was still here to see me take part in these finals,” he continued.

“I thought I had missed the boat at 5-4, he missed a couple but I never took advantage. I was thinking, is that going to give him confidence and then he will go on a roll? I stuck with it and felt great coming into tonight. 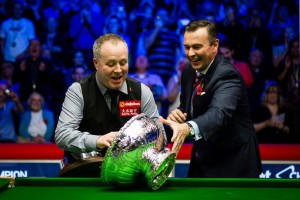 “It is up to people to think about [if I am playing as well as I ever have]. When I play like that, there is no greater feeling. You get in the balls and think you are going to clear up at every chance. I missed a couple at the end but potted a good long red to swing it back my way and finish it off. There is no better feeling than doing it in front of a packed audience, playing against somebody as good as Ronnie.”

O’Sullivan, was gracious in defeat; “Well played to John, he played fantastic all week – he was by far the best player of the week. I tried to hang on in there today and make a game of it. John is on a roll at the minute, he is really starting to play as he did a few years ago, so for me he is probably the best player in the world at the moment with the way he is playing.

“I need to find some consistency if I am going to win tournaments again. It is ok playing in spells but you get found out playing players like John. Against most players I might have had a chance of winning but against world-class opposition I made too many mistakes.”