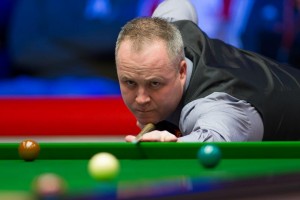 John Higgins continued his rich vein of form as he beat Judd Trump to reach tomorrow’s semi-final of the Dafabet Champion of Champions where he will face Ding Junhui. It was the Scotsman’s first win over Trump in four attempts this season and he was good value for the win with a determined all-round game.

Higgins had won the inaugural China Championship last Saturday, beating Stuart Bingham to claim the top prize, and he shook off any traces of jet lag with a strong showing. After a dull 31 minute opener, the match hit a gear as Higgins compiled a break of 112 to take a 2-0 lead before Trump came back at him with runs of 47 and 56 to take the third and 60 to square the match at the mid-session interval.

Higgins took the next two to move into a 4-2 lead before a run of 90 put him one away from victory.
Trump, who hadn’t done much wrong, trailed 52-0 in the eighth frame but a break of 79 reduced arrears. A 65 in the next made things interesting at 4-5 but Higgins saved his best to last with a 143 total clearance to take the win.

“I was feeling confident and going for my shots, trying to give Judd a game, and it worked for me,” said Higgins after the match.

“I feel as if when I get in the balls I feel better than I did ten or 15 years ago. Sometimes when you are feeling confident and your eye is in you make it easier for yourself than the times when you are always out of position and every shot is hard. Just now, it looks as if I get to build some decent breaks. 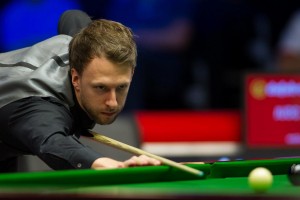 “When we went to China the tables played really well; I got to the quarters of the International Championship but came up against an inspired Ding, and last week I kept it going and played well – that gave me some confidence.

“You have to ride the crest of a wave and enjoy it because you know sooner or later you will go back to normal and you are missing everything.

“Ding is back playing the way we know he can play and it will be a tough, tough game.”

In the day’s opener Higgins had beaten Shaun Murphy 4-2 to progress. Although there were no big breaks it was good quality stuff. The highlight being a superb 48 from Higgins to help overturn a 77 points lead in the third frame, after conceding 42 points with seven fouls on the pink.

Trump enjoyed a 4-3 win over up-and-coming Anthony McGill in an outstanding meeting that produced three centuries – all from Trump – and plenty of mid-sized breaks. It was fitting that the decider was won with a 132 total clearance from the Bristol man.

Play continues tomorrow afternoon with the two semi-finals. At 1.00pm with Ding Junhui v John Higgins followed by Ronnie O’Sullivan v Mark Allen. Both matches are the best of 11 frames.