Allen Sets Up Semi-Final Against Ronnie 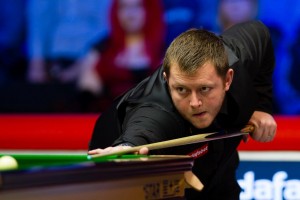 Antrim’s Mark Allen enjoyed a fine victory over World No.1 Mark Selby, winning a final frame decider to record a 6-5 win and move into the semi-finals of the Dafabet Champion of Champions on Friday evening where he will face Ronnie O’Sullivan.

Having won the Players Championship on ITV4 earlier in the year, the match was Allen’s seventh consecutive match undefeated on the popular sports channel and it was a high quality game.

There were 11 breaks over 50 as the players shared the opening skirmishes as the left for the mid-session interval at 2-2. Allen though won a tight fifth frame and then recorded a run of 80 in the next to move into a 4-2 lead.

They shared the next two to leave the Northern Irishman just one from victory. Selby though fought hard as he always does and a break of 52 won the next before a run of 63 stole the penultimate frame from Allen and forced the decider. 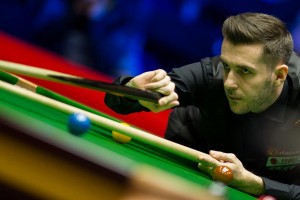 Selby looked favourite at 43 ahead but Allen got to the table and compiled a superb match-winning break of 63 to take an excellent win.

Earlier in the first round matches, Selby had enjoyed a quick win in his opener as he defeated recent English Open winner Liang Wenbo 4-0 in an hour and ten minutes. The highlight was a century in the fourth frame to seal the match.

Allen, who had qualified for this event by winning the Players Championship back in March, made it through to the evening play-off match by defeating Joe Perry in the second game of the afternoon session.

Commented Allen; “It was very tough out there tonight, the table conditions were not good at all. We handled it pretty well in the early part of the match but then we started to miss easy balls and you get ground down.

“It was a bit different from [last week at the China Championship] because I felt I was playing really well but that was a struggle, it was a matter of who got over the line. I knew it was going to a decider, Brendan Moore is renowned for refereeing deciders and when I got the kick at 5-4 up and landed terrible on the blue, missed two more chances to close it out, you think you are going to lose after that.

“When I got that chance at the end the pressure is almost off a bit because you fully expected him to win the frame in one visit at the end, but I managed to get a good chance and make a good break.
“I am sure Mark is a bit disappointed with the way he played but I think both of our games are in good shape, so I wouldn’t be too bothered by that performance – the table got the better of us today.

“There are two big matches ahead of me, they will be very tough no matter who I play. It is Ronnie next – I played really well against him in Romania and just came out on the wrong side of a tight match but if I can play the way I have been then I have a good chance.”