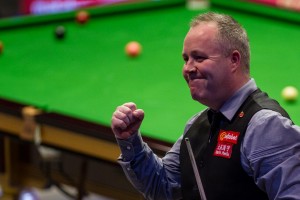 John Higgins progressed to the final of the Dafabet Champion of Champions, edging out Ding Junhui in the deciding frame of a high-quality best-of-11 encounter at Coventry’s Ricoh Arena.

Scotland’s Higgins will now face the winner of this evening’s semi-final between Ronnie O’Sullivan and Mark Allen over 19 frames tomorrow.

Higgins and Ding kept in touch with one another throughout the match, sharing the first ten frames to set up a decider. Ding made four centuries along the way, including a 135 in the second frame and a 142 to take a 4-3 lead after the seventh.

The Dragon’, at the Dafabet Champion of Champions as 6-Reds and Shanghai Masters champion, could have gone 5-3 up in the eighth. Higgins had taken a 60-1 lead but was pegged back to SCORE before eventually taking the frame on the pink.

In the decider Higgins rattled off a quick 28 before missing a blue he would normally expect to make, but the Scot took his chance at his second visit and wrapped the frame up at 69-1 with a closing 41. 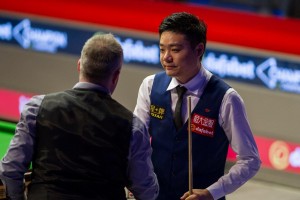 The ‘Wizard of Wishaw’ only joined the line-up for the tournament last week, and the China Championship winner was delighted to continue his rich vein of form despite a classy performance by Ding.

“I am over the moon,” said Higgins. “The last three or four times I have played Ding he has played like that, so I knew I had to play really good myself to have a chance. It was a good game.

“I enjoyed watching Ding play – he made four centuries and he was totally flawless. Ronnie and Steve are the greatest break builders the game has had and Ding is probably like Steve Davis – he is never more than four or five inches away from the object ball in each break, and you just sit and admire it.

“I know how good a player Ding is, so to beat him in that way and the way he played, it is one of your best wins because we all know how good he is.

“I will try and ride this form as best as I can, and hopefully I will play well tomorrow. Ronnie against Mark will be a great game tonight, Mark is a player who isn’t frightened of anybody and with conditions the way they are, that will suit Mark Allen with the little touch shots, little cannons and little flicks – he will be deadly there tonight and it will be a great game.”

The Dafabet Champion of Champions continues with the second semi-final between O’Sullivan and Allen this evening. The best of 19 final takes place over two sessions on Saturday.