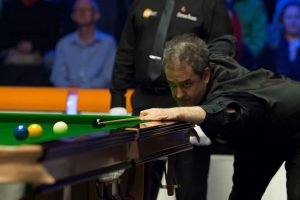 Anthony Hamilton became the first man through to the semi-finals of the 188BET Champion of Champions, beating Ryan Day 6-4 in the Group One final at Coventry’s Ricoh Arena.

Hamilton, who qualified for the 188BET Champion of Champions when he won the first ranking title of his 26-year career at the German Masters in February, trailed 2-0 in the early stages of the group final but drew level at 2-2 by the mid-session interval.

Day soon regained his two-frame advantage in the best of 11 clash with the help of a 133 break in the fifth, but Hamilton again fought back to tie the match at 4-4, before pulling ahead and taking what became the final frame 62-56 to secure his place in the last four.

“I beat two good players today,” said Hamilton, who will play the winner of Thursday’s Group Four over 11 frames on Friday evening.

“They were both hard matches for me because I was struggling with my game – I have had a few weeks off, so I was a bit rusty. I am proud that I dug and kept punching away – look what can happen if you don’t stop punching.

“I am 46, I have to make the most of these opportunities, so I just kept punching. I am either good or bad at the moment – I can be world class or really bad. Whether I make a 140 or miss four blacks off the spot, I am trying to be the same.

“I will play the winner of the group that includes Ronnie O’Sullivan and John Higgins. I’d love to play either of them. I don’t mind if I get pumped – it could be my last time to play one of the gods in a great venue. It would be perfect.”

Earlier in the day Hamilton had beaten Ding Junhui 4-2 in the day’s first group semi-final. The match was locked at 2-2 with three to play, but Hamilton managed to pull clear in a scrappy encounter, sealing the victory with a 75 clearance.

Day booked his place in the evening’s final with a 4-2 success over Barry Hawkins. Both players scored centuries as that match too reached 2-2, but breaks of 79 in the fifth frame and then 71 in the sixth saw the Welshman to the final.

Featuring tournament winners from the last 12 months including John Higgins, Mark Selby and Ronnie O’Sullivan, the 188BET Champion of Champions marks its fifth year as players go head to head for the prestigious title and the £100,000 winner’s prize.