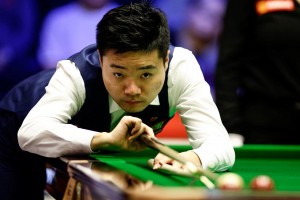 Ding Junhui became the second player through to Friday’s semi-finals of the Dafabet Champion of Champions at the Ricoh Arena, Coventry, beating Stuart Bingham 6-4 in a quality match.

It was anyone’s game at 4-4 but Ding played to excellent frames with a run of 125 putting him the driving seat and then breaks of 45 and 44 clinching the win.

The 29 year-old Chinese had enjoyed a good run of form leading into the event having won the 6-Reds World Championship in Bangkok and the Shanghai Masters in September. He beat Ali Carter in the afternoon session in his first round match as he overcame a 2-1 deficit to take a hard-fought match 4-2.

Bingham had looked in good shape as he disposed of Neil Robertson 4-2, recording breaks of 94, 61, 132 and 59 to take victory. That set up the match to determine who would win Group One. Bingham won a scrappy 26 minute opener, and then compiled a break of 94 to go 2-0 to the good before a break of 93 from Ding reduced arrears.

Bingham though regained a two frame cushion in the next with a break of 61 before Ding took the next two to square the match at three-all. Ding took the lead for the first time in the seventh frame, courtesy of a run of 55 but Bingham pegged him back, winning the 28 minute eight frame although a sizeable delay due to the scoring system packing up didn’t help.

Ding then took control with the best break of the match – a 125 – before closing it out in the tenth frame. 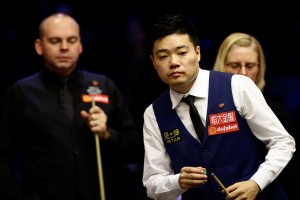 “When I was 3-1 down I was thinking, ‘just keep going’ because I knew I could score. I had to forget about the score and take my chances.

“Stuart was having the same problems with jetlag and concentration, so when I missed balls I knew it was okay and I could wait for my next chance, clear up and win the frame. I believed in myself that I could finish well today. After I made the century break I felt a lot better.

“It doesn’t matter how good or bad you play, you have to keep your concentration and keep working hard because a win is a win.

“I won’t practice too much before the semi-finals, maybe just an hour or two a day – getting rest is more important.”