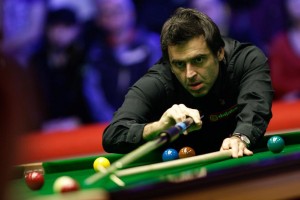 Ronnie O’Sullivan made a welcome return to the Dafabet Champion of Champions at the Ricoh Arena, Coventry as he beat Robin Hull and then Martin Gould to make his way into the semi-finals of the £300,000 event. O’Sullivan is still unbeaten through ten matches in this tournament, having won the inaugural event in 2013, and then successfully defended it the following year.

In 2015, he missed the competition, leaving the field clear for Neil Robertson’s victory but returned today with a vengeance as he won Group 3 in style. In the afternoon match he started well against Finnish player Robin Hull with breaks of 88 and 102 to open an early lead. Hull had qualified for the event by winning the Shoot Out in February, but a World Ranking of 59 made O’Sullivan a very big pre-match favourite.

Hull though, wasn’t intimidated as he held his own, recording runs of 83 and 99 to level terms at two frames each. O’Sullivan though has many gears and he dug in to take the fifth frame which at 26 minutes was the longest of the game. Breaks of 73 and 42 in what was the final session sealed the win for the Essex man.

In the second afternoon match, Martin Gould got the better of Mark Davis in a drawn out affair that was topped and tailed by two 30 minute-plus frames. Gould was in the event courtesy of victory in the German Masters in February while Davis triumphed in the World Seniors to earn his berth.

The Pinner potter took the lengthy first before a run of 103 in the second gave him a 2-0 lead. Davis responded with an 80 in the third followed by a break of 91 in the fourth to leave the game finely poised.

They shared the next two before Gould took the win as he scrapped out a 39 minute final frame to set up the evening clash with O’Sullivan.

The Rocket was never behind as solid break-building kept him ahead of Gould and he closed out a 6-2 victory with a century – his first of the match and second of the day.

Commented O’Sullivan, “I think Martin didn’t play well, he didn’t play well in his other match and I think he is suffering from a bit of a confidence thing at the moment, he hasn’t had as good a season as he normally has and I think I am the same at the moment. It shows in our game because we are both probably making too many errors. If we had played a player in form either one of us would have been beaten.

“I was on top for a while and it was coming easy but I took too much time out and it feels like I am trying to climb Everest again and as I got older I think, ‘can I really be bothered?’. I did so many exhibitions last year, I did about 60, I am sure that has had some sort of effect on my game; I don’t feel as tight and compact as I used to. If you have a combination of those together then there are going to be weaknesses in your game.

“I am keen, I will always be keen, but I have had it quite easy for the last four or five years and have felt on top of my game and I feel that I am back to having to really graft it, the confidence is probably not there as much.

“Trying to find your form in events is impossible. I didn’t practice going into the season because I was doing things off the table which I probably shouldn’t have done, so I didn’t come into the season as prepared as I should have been and it has been a nightmare.

“I love this venue and the table always plays fantastic here. It is an invitational tournament and I like those – nowadays it is seven matches to win a ranking event, it is a bit hard work!

“I will go back home now, have a couple of days of practice and come back Thursday night, get a little knock on the tables and then I play on Friday night.”