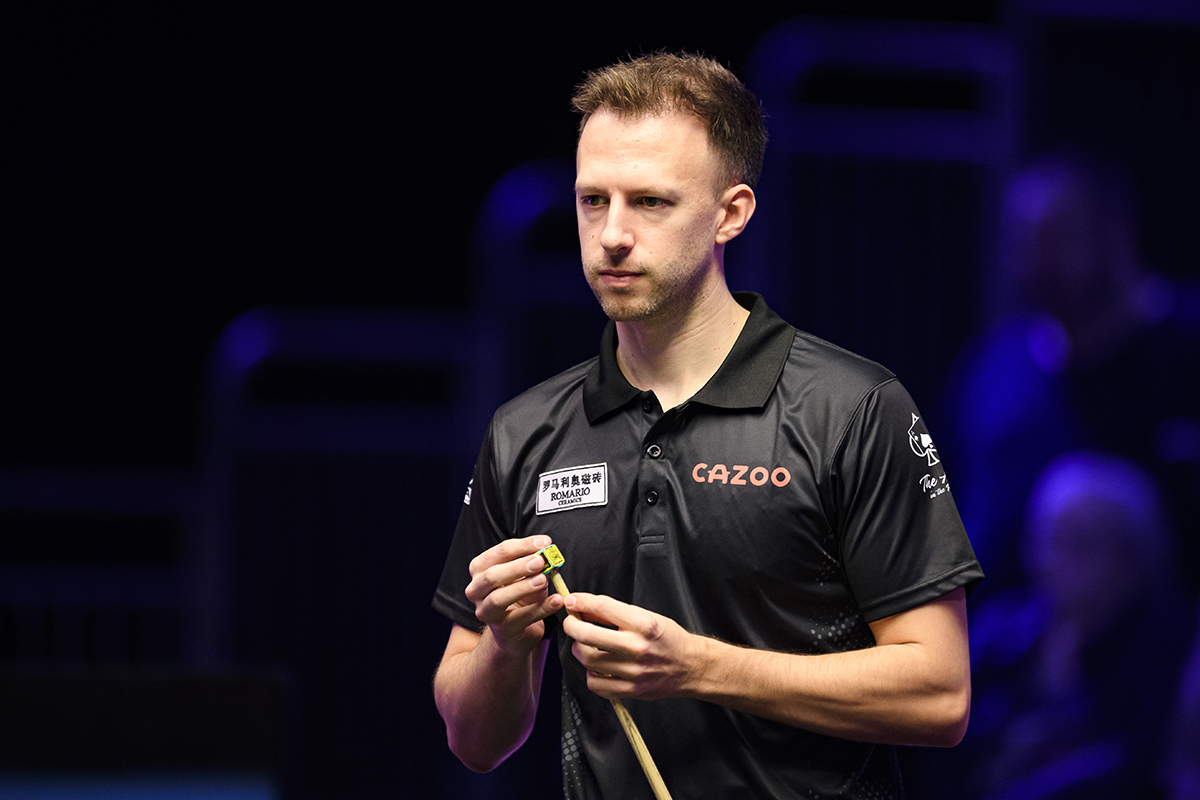 Judd Trump has become the first player into the semi-finals of the 2021 Cazoo Champion of Champions beating Ryan Day in the Group 1 final 6-0 after the opening day of play at the Bolton Whites Hotel, University of Bolton Stadium.

Trump faced off against World Seniors Champion David Lilley in the opening encounter of the tournament coming through 4-1 surviving an early scare after it was the Pride of the Tyne who had taken the opening frame off the World No.2.

The Ace in the Pack’s win set up an evening clash with Day who had overcome Stephen Maguire in a scrappy encounter 4-2 for the pair to meet for the first time since March in the WST Pro Series.

Day, the 2021 Snooker Shoot-Out champion showed glimpses of magic against Maguire but in truth, Trump never allowed a chance in their clash.

Trump opened the match with the first century of the tournament delivering a clearance of 104. That lead was soon doubled in the second after Day missed an opportunity on the pink to allow Trump in who made the Welshman pay with a break of 67. Day never got going in the contest and it was Trump who continued to apply the heat going into the interval 4-0 up after breaks of 68 and 47 in the fourth.

It’s best of 11 for the Group Finals and Trump knew he needed the six to make it through safely to the semi-finals and kept things unanswered in the fifth on the blue. The whitewash was in Trump’s eyesight and put down a final break of 61 to leave Day with too much to do in the final frame: “You do not get many six-nils against these top players. When I go five-nil up, I always think this is too good to be true, something’s going to happen. To get through, it was very comfortable in the end. I will probably need to stay at that sort of level and standard if I am going to progress in the tournament,” said Trump.

“This is a really good event. You come here and know you play both games in one day. If you get through, you know you’re straight in the deep end. It’s nice to have a couple of days off, watch all the games and get some practice. It’ll be a special atmosphere for the semi-finals,” – Trump

“You’re under a little pressure in the first game, you want to get through. It’s a short distance. You do not want to be going home early doors. It took me a little time to get used to the table conditions and once I got warmed up and tonight was a lot better.”

Trump will now play in the first semi-final on Friday against the winner of Group 4 tomorrow with Neil Robertson, Mark Williams, Kyren Wilson, and Jordan Brown in action: “This event is special. If you look down the winners, it’s always the big names and top players who have won this. Mark Allen produced an amazing standard in the last year. We’ve seen some great finals with Ronnie O’Sullivan and the one with me and Neil. It’s one to try and tick off the list. It would be a real special one for me.”

He was also pleased with this year’s Cazoo Champion of Champions attire with the exclusive performance fit polo shirts: “I think that’s why I played so well tonight. I felt a lot more relaxed. I felt a lot freer. You’re not tied up in heavy clothing and stuff getting in the way and no bow tie getting in the way. This is more like the sort of thing we wear in practice. You’re a lot more relaxed and I think it comes out in the way I play.”

The World No.2 will now play in the first semi-final on Friday against the winner of Group 4 tomorrow with Neil Robertson, Mark Williams, Kyren Wilson, and Jordan Brown in action.

Watch the Cazoo Champion of Champions live on ITV4 from 12:45pm with Robertson vs Williams and Wilson vs Brown. See where you can watch in your country right here.

Buy tickets for the rest of the week here.