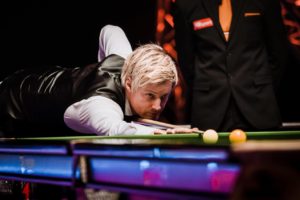 Defending champion Neil Robertson beat Ding Junhui 6-4 to advance to the semi-finals of the 888sport Champion of Champions at Marshall Arena, Milton Keynes, live on ITV4.

Robertson had earlier defeated Jimmy White 4-0 in his Group 1 semi-final, before overcoming Ding’s resistance in the group final. The Thunder From Down Under made four centuries during the day and at times looked at his break-building best. However, some uncharacteristic errors allowed Ding to steal on more than one occasion before Robertson eventually prevailed.

The defending champion will now face either Mark Selby, Kyren Wilson, Stephen Maguire or Luca Brecel in the tournament semi-finals on Friday evening.

“I made a couple of centuries in the match and a couple of other breaks and looked good in amongst the balls but just allowed some frames to drag on a little bit,” said Robertson. “I missed a couple of tricky reds to the middle where I would have killed the frames off much earlier and we should probably be talking about winning the game 6-2.

“Ding fought back in a lot of the frames and won some on the colours, so I had to hold my nerve a little bit, especially with that black at 4-4 which I had to play with a lot of pace. I’m really pleased with how I finished it off out there.

“It’s quite early in the season and we aren’t used to playing two matches in one day with the best of seven in the afternoon and a best of 11 in the evening, that’s quite a lot of snooker to play. I think at times I just drifted in and out of concentration.

“I have a great record in this event, won it twice and this will be my fifth semi-final. I love this tournament, all the players do and to be defending champion and get to the semi-finals is a really good defence so far.”

Ding took the opening frame of the match with a 93, but Robertson hit back with his 21st century of the season; a 139 total clearance to level at 1-1.

After that, though, Robertson struggled and missed pots in both the third and fourth frames which handed Ding opportunities. The Chinese star took a 2-1 lead, but a miss of his own on the green brought

Robertson back to the table in the fourth. The Australian then missed the brown, but ran safe and when play opened up, The Thunder From Down Under made three great shots to level; first a long brown, then a perfectly cut pink before a tricky black for the frame.

Robertson gained the lead for the first time in the match after the interval when he made his fourth century of the day, a 104. His lead was then doubled in the next thanks to a frame-winning break of 62.

A missed red to the middle saw Robertson break down on 56 in the seventh, and Ding capitalised to half the deficit. As was before the interval, Robertson was presenting this opponent with chances, and Ding grasped another to pull the match back to 4-4.

The ninth frame proved to be the longest of the match. Both players missed chances before Robertson eventually won it on the black to move within one of the semi-finals, and he completed the job with a frame to spare.

In the second semi-final John Higgins became only the second player in snooker history, after Ronnie O’Sullivan, to make 800 century breaks as he moved 2-0 up on Ding, only to see the Chinese star win four of the last five frames to advance with a 4-3 win.

The 888sport Champion of Champions continues on Tuesday with Group 2, featuring World No.1 Judd Trump against Stuart Bingham and Shaun Murphy facing David Gilbert in the Group 2 semi-finals.