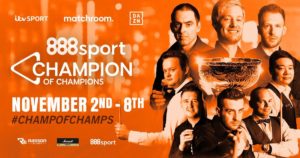 Played over seven days live on ITV4 and networks worldwide, snooker’s showpiece 888sport Champion of Champions has become one of the biggest events of the season since its inception in 2013. The likes of O’Sullivan, John Higgins and Shaun Murphy have previously lifted the title. The tournament carries a £440,000 prize fund from which the winner will take home £150,000. All players, staff and personnel must return a negative Covid-19 test before entering the event space, and all four players competing on Monday have received negative test results.

Emily Frazer, Managing Director of Matchroom Multi Sport, said: “We are thrilled to welcome 888sport on board as title sponsor for the Champion of Champions. This is one of the biggest snooker events of the season and we’re excited to get the action underway.

“We have a field of elite players who have proven their talent by winning events over the last 12 months. We may not be able to have fans inside the arena with us this year, but we’ve made plans to ensure the event remains a standout spectacle on the snooker calendar. Fans can still be involved by submitted pictures to be displayed on screens inside the arena, and we’ve expanded our social media presence to bring even more exclusive content than ever before.

“Together with 888sport, and the production team at ITV Sport, we’ve been working hard to deliver what will be another memorable 888sport Champion of Champions.”

Guy Cohen, SVP of B2C at 888sport, said: “888sport is delighted to announce our sponsorship of the 2020 Champion of Champions tournament.

“We are very much looking forward to working with Matchroom Multi Sport to support this top class live sporting event and to an exciting competition and the crowning of a new Champion of Champions in Milton Keynes.”

The 888sport Champion of Champions begins at 1pm on Monday, November 2, with legend and World Seniors champion Jimmy White in action against Robertson.

The tournament starts with a quartet of four-man groups played over four days from Monday, November 2 until Thursday, November 5. The winner of each group progresses to the semi-finals, with one played on Friday, November 5 and the other on Saturday, November 7. The final on Sunday, November 8 will be over 19 frames.