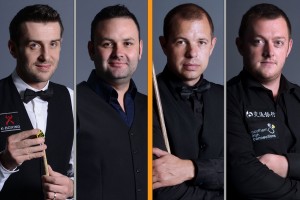 World number one Mark Selby headlines the action at the 188BET Champion of Champions on Friday, with Stephen Maguire, Barry Hawkins and Mark Allen also featuring as the group stage draws to a close at Coventry’s Ricoh Arena.

Leicester’s Selby breaks off Group 2 in his local tournament against Maguire at 1pm.

The Jester is back for a third straight year after winning the German Masters and China Open last season and comes into the event off the back of a run to the semi-finals of the International Championship – his best performance of the campaign so far.

He has won the last four meetings with Maguire, including the Group final on his way to the semi-finals here in 2013, and 188BET fancy him going the extra couple of steps this year at 5/1.

World number 15 Maguire qualified by winning the European Tour’s Lisbon Open last December, but is hoping that his fortunes improve after a slow start to the season.

The Scot’s run to the semi-finals of the Australian Open was the only time he has progressed beyond the last 32 of any event.

188BET are offering 18/1 on him upsetting the form book and lifting the trophy on Sunday night.

The winner will play either Barry Hawkins or Mark Allen, who go head to head in a battle of the left-handers.

The world number eight is fairly fresh coming into what will be just his sixth tournament of the campaign, which has also seen him reach the quarter-finals of the Paul Hunter Classic, and 188BET have him at 16/1 to go all the way.

He has won his last three meetings against Allen, who was the last player to qualify after winning the Bulgarian Open on Sunday night.

‘The Pistol’ is therefore the form player coming into the tournament, where he will be looking for his first win after losing his opening match in each of the first two years.

World number 10 Allen is being backed at 10/1 by 188BET to maintain his winning momentum and clinch a second title in the space of a week.