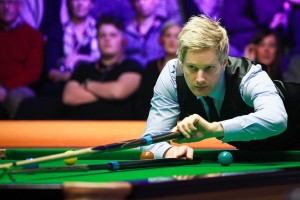 After five days of intense of competition at Coventry’s Ricoh Arena, it all comes down to this as the two left-handers battle it out over the best of 19 for the title and top prize of £100,000.

The match is split into two sessions, with the first nine frames being played at 1pm before a maximum of a further 10 will conclude proceedings at 7pm.

After reaching the semi-finals in each of the first two years, Robertson made it third time lucky when he beat good friend Joe Perry 6-4 on Saturday. 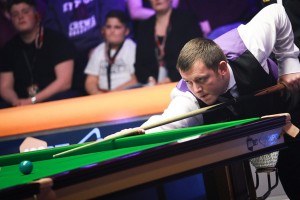 The ‘Thunder from Down Under’ produced the highest break of the tournament with a stunning 144 clearance, while his long potting was notably ruthless on his way to booking his spot in today’s showdown.

He also beat Rory McLeod and Zhou Yuelong in Group 4 this week and has extra motivation going into his first final since suffering a 10-2 humiliation by Shaun Murphy at the Masters last January.

“That defeat hurt a lot,” he reflected. “So I will be really determined to make amends for that.”

Meanwhile, Allen is very much the form player on the tour at the moment.

His 6-3 semi-final victory over Kyren Wilson made it 10 competitive wins in a row, following his triumph at the European Tour’s Bulgarian Open last Sunday, and he notably produced the goods when it really mattered against the Shanghai Masters champion.

Having lost his opening match in each of the previous two years here, ‘the Pistol’ has wasted no time in setting the record straight in 2015.

He came through a tough opening match against Barry Hawkins 4-2, before a fairly comfortable 6-2 win over Stephen Maguire saw him win Group 2.

Standing in his way of a second trophy in the space of a week is the man who he regards as “the best all-round player in the world”.

Nevertheless, the world number 11 is feeling confident about his chances.

“He has a great temperament in the big matches so it is going to be tough tomorrow but I am in the final, I am playing well and if I can concentrate on my game then I think I have a good chance.”

In the battle of the left-handers, who will get it right when it matters the most?