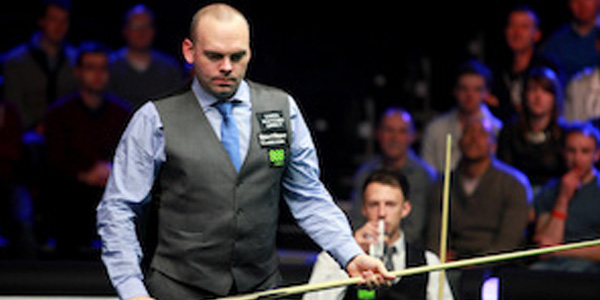 STUART BINGHAM will be returning to the Ricoh Arena, Coventry at the weekend as he recorded wins over Ricky Walden and then Judd Trump to make it through to the closing stages of the inaugural 888casino Champion of Champions where he will face Mark Selby in the semi-finals.

The Essex potter, who qualified for the tournament by winning the final Premier League Snooker event November last year, put in a very solid performance, making few costly errors and taking full advantage when in the balls.

Trump, who had earlier beaten an off form Marco Fu in his opening match, made too many errors including a black missed off the spot in the sixth frame when a frame winning break looked on the cards.

It was perhaps the turning point in the match as it allowed Bingham to compile a break of 65 to move into a 4-2 lead when it could have gone level at 3-3. The World No. 10 closed out the match with a break of 47 in the next and then edged a scrappy final frame for a 6-2 win.

A delighted Bingham said, “I played pretty well. In the first frames Judd missed I think three balls and I punished him hard to go 3-0 up. He had a little fight back to go 3-2 and he maybe should have gone 3-3 but missed a black off the spot and let me in.

“I made a good clearance from there to go 4-2 and then I played pretty solidly to get over the line. I had four breaks over 60 and a couple of 40s so I’m scoring well and I punished him when he did miss.

“When it got to 3-2 and he had a chance for 3-3 you start looking at the way the frames and a few shots start going against you. At 3-1 I didn’t feel I was playing great and I didn’t really need to pot a ball to get in. I made a good break to go to 5-2 and was happy to get over the line.

“The semi-final will be tough. Mark has just won Antwerp so he will be full of confidence and he played solidly yesterday. It will be a tough game and I need to be at my best to have a chance.”

Trump was honest about his poor showing; “I would say if I win the first frame I win 80 or 90 percent of matches, the first frame is that important. All I needed was an easy red and the next couple of frames just got away. I got back into the game but threw it away again.

“It has just been concentration lately and I am getting punished for it. At 3-2 Stuart missed a couple, I missed a couple and then I had an easy, easy chance I missed on the black. From then on I knew the balls would punish me and there was no way back.”

The 888casino Champion of Champions is a brand new event featuring winners of all major tournaments over the past 12 months. The players are grouped into four groups of four and contest semi-finals and then a final all on the same day.

The winners then move forward to the weekend where there are two semi-finals on Saturday followed by the final on Sunday 24th November. The total prize-fund is £270,000 with £100,000 going to the champion.