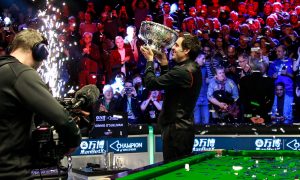 Following record crowds and the tournament’s best ever viewing figures the prize fund for the 2019 ManBetX Champion of Champions has been increased to £440,000, with the winner set to take home £150,000.

Ronnie O’Sullivan’s 2018 final win over Kyren Wilson peaked at 990,000 and averaged 616,000 viewers on ITV4 on Sunday evening, the tournament’s highest ever viewing figures, while a record number of snooker fans watched the action live at the Ricoh Arena in Coventry.

The continued growth of the ManBetX Champion of Champions as one of snooker’s biggest showpiece events was further evidenced online with a huge growth in the tournament’s reach and engagement with fans on social media.

As a result the winner of the next ManBetX Champion of Champions, to take place at Ricoh Arena, Coventry from Monday 4th to Sunday 10th November 2019, will receive £150,000. The runner-up prize is increased to £60,000 with losing semi-finalists earning £30,000. The four losing group finalists get £17,500 with the losing group semi-finalists to take home £12,500.

Matchroom Multi Sport COO Emily Frazer said: “The ManBetX Champion of Champions set the bar last week for not only seven days of sensational snooker but also a record-breaking live attending audience as well as the highest TV viewing figures yet for the event.

“We witnessed Mark Selby’s 147 on Wednesday which underlined the high level of play that was consistently displayed throughout the event. With consistent growth since the tournament began in 2013 the ManBetX Champion of Champions is now one of the biggest events of the season and our increase in prize fund to £440,000 with an additional £50,000 added to the winner’s prize reflects just how prestigious the Champion of Champions is.

“Our 2019 ticket sales have already broken opening day records with the final selling out quickly. We are poised for 2019 and have plenty of plans to continue growing the ManBetX Champion of Champions and ensure another year of top-quality viewing and providing a different and exciting experience for ticket holders at the Ricoh Arena.”

Lewis Hurt, ITV Sport’s director for the event, added: “The Champion of Champions is a great tournament which consistently delivers high quality snooker and strong audience figures for ITV4. Concluding with another dramatic final- this year’s tournament has once again shown why it is fast becoming one of the most popular events on the snooker calendar for both the players and the fans.”

Justine Hewitt, Head of Operations at the Ricoh Arena, said: “The Ricoh Arena has staged the Champion of Champions snooker tournament for a number of years now and every year the event has gone from strength-to-strength, culminating in a record year for ticket sales in 2018, which reinforces both our venue and the city of Coventry as a top-class destination for a variety of sports.

“Next year’s Champion of Champions tournament will be played during Coventry’s year as European City of Sport, and we are looking forward to playing our part in celebrating Coventry’s diverse sport offering, including welcoming back some of the world’s best snooker players next November.”

Tickets for the 2019 ManBetX Champion of Champions are on are on sale now. Prices start from just £11 per session with Premium and VIP packages also available. VIP tickets include prime view reserved seating with priority entry to arena, access to the tournament lounge where you’ll be able to see players practicing before their match, a two-course meal and much more.

Featuring tournament winners from the previous 12 months, the ManBetX Champion of Champions has become one of snooker’s biggest tournaments since launching at Ricoh Arena in 2013. The likes of Ronnie O’Sullivan, John Higgins and Shaun Murphy have all lifted the trophy.