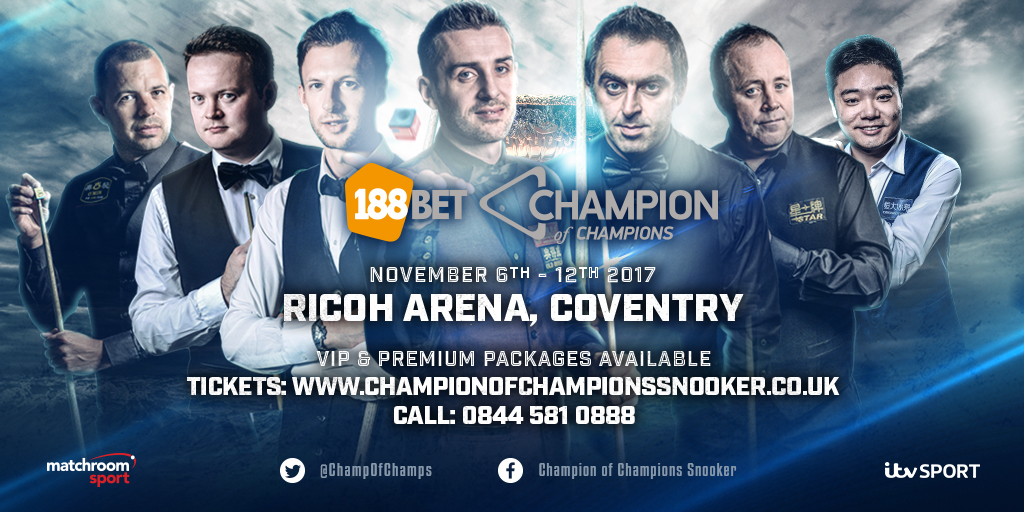 The draw for snooker’s prestigious 188BET Champion of Champions at Coventry’s Ricoh Arena has been announced.

Ding Junhui will open proceedings in Group One on Monday, November 6. The World Open champion takes on Anthony Hamilton, with Barry Hawkins up against Ryan Day in the second Group One semi-final.

Two-time 188BET Champion of Champions winner Ronnie O’Sullivan gets Thursday’s Group Four action underway against the winner of the International Championship, which concludes on Sunday. John Higgins will then begin his tournament defence against fellow Scot Anthony McGill.

The 188BET Champion of Champions features 16 players, all tournament winners over the last 12 months. The players are split into four groups of four players with each group comprising two semi-finals played over seven frames in the afternoon session, followed by a final in the evening played over 11 frames.

Broadcast throughout by ITV4 in the UK and on networks around the world, the 188BET Champion of Champions marks its fifth year in 2017 and pits tournament winners from the previous 12 months head to head for the prestigious title and the £100,000 winner’s prize.
Tickets are on sale now at www.championofchampionssnooker.co.uk priced from just £11 for group stage sessions.