TRUMP TO MEET ROBERTSON FOR MANBETX CHAMPION OF CHAMPIONS TITLE 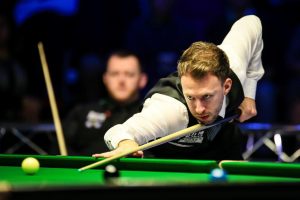 Judd Trump will face Neil Robertson in the final of the ManBetX Champion of Champions after the World No.1 defeated Mark Allen 6-4 in their semi-final at the Ricoh Arena in Coventry.

Trump took a 3-0 lead in the match and looked on-course to be four up at the mid-session interval, but a kick with 24 on the board handed control to Allen. From there it was 45 minutes until the World Champion would score again.

Allen made 393 points without reply to go from 3-0 down to 4-3 up with breaks including a 106 and the tournament’s highest so far, a 140. Trump responded with an 82 and with the help of a fluked red regained his lead in the ninth frame. A perfect split early in the tenth presented Trump the opportunity to seal victory, which he did with a break of 98.

“At 4-3 down he was looking in complete control,” said Trump. “I was unlucky not to go 4-0 up, I got quite a bad kick but the same happened to him when he could have gone 5-3 up. The game turned a little bit on a few bits of luck either way. I looked out of it; he didn’t look like missing from where I was sat. He looked in complete control but I managed to pot a few crucial balls at crucial times, I got a bit of luck to go 5-4 up and made a good break in the last.

“Over the last few years Neil has really come back to form, the same as me. He had a massive win over Ronnie from what I saw last night. They were both playing well so he will take a lot of confidence from that but my record against him is pretty good so I go in fancying my chances.”

The best-of-19 final begins at 1pm on Sunday and is played over two sessions. The tournament is broadcast live on ITV4 and networks around with world, including DAZN. The winner will take home £150,000 from a prize fund of £440,000.