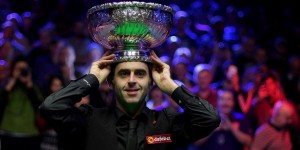 RONNIE O’SULLIVAN defended his Dafabet Champion of Champions title in magnificent style as he beat Judd Trump 10-7 at the Ricoh Arena, Coventry in a match of the highest quality. It capped a week that saw him record victories over Stuart Bingham, Marco Fu, Ding Junhui and then Trump to claim the £100,000 top prize.

Such was the standard of both men that there were six centuries in the 17 frames as well as another 11 breaks over 50 as both players were at the peak of their respective games.

In the end, it was the 38 year-old O’Sullivan’s relentless break-building that secured him the victory after Trump had clawed his way back from 8-3 down to win four successive frames including back to back centuries.

That had got him to within one of his opponent but O’Sullivan turned the screw, taking the last two frames as he ended with another fabulous century, his fourth of the match.

“That was as well as you can play,” said O’Sullivan.

“I had four centuries, two or three 70s and a couple of 80s. That is nine frames without reply. Judd played some good stuff as well and I am happy to have been involved in a match of such quality.

“At 8-3 I knew Judd is an aggressive player and would come out all guns blazing, he wasn’t going to sit on the fence and wait for his chances, he was going to try and make something happen. He potted some fantastic balls and got back in, but I always said in my mind that if he gets to within one or two frames then the balls get a bit harder, a bit more pressure mounts.

“I thought be patient, try and keep him honest and that is what I did. That is when it matters, at the end of the match.

O’Sullivan had set the scene in the opening rack with a blistering 137 total clearance and then followed that with a frame-winning break of 82 to take the early lead. Trump to his credit, took the next two frames before runs of 87 and 80 restored the Rocket’s two frame margin.

It was mesmerising stuff from O’Sullivan and after Trump secured the seventh frame, a brace of 130-plus breaks from the defending champion crowned an outstanding session as he took a 6-3 lead into the evening.

O’Sullivan won the first two when they resumed to get to 8-3 as Trump looked dead and buried. He mounted his superb fight back though, before O’Sullivan pulled away to win.

For Trump, there were plenty of positives to take in defeat; “It was a good game, I really enjoyed it. It was probably one of the only games where I am not really too disappointed about losing.

“100 percent I would have won if it was against anyone else, I would have won comfortably. For me, that is what the game is all about, getting that sort of opponent to bring you on and in other sports there is that kind of rivalry and I think I need Ronnie to push myself to the next level.

“I knew I was playing okay at 8-3 down but it just wasn’t going right for me. Then he missed one or two and that was it, I got a bit of confidence and momentum, got back into the game and then even at 8-7 I nearly nicked that frame and that would have been a big frame. The way he shut out the match was just typical Ronnie.

“I showed a lot of maturity this week. At times I wasn’t playing great stuff but I just stuck in there, which I probably wouldn’t have done a few seasons ago. The way I came back today under pressure, there is a lot to take and a lot to look forward to.”