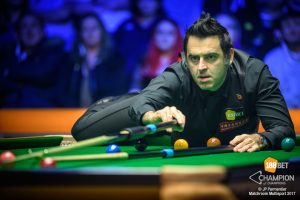 Ronnie O’Sullivan recorded his 900th career century break en-route to reaching the 188BET Champion of Champions final for a fourth time with a 6-2 semi-final success over Anthony Hamilton at the Ricoh Arena in Coventry.

The only time O’Sullivan hasn’t made the final of this tournament was in 2015, when he did not participate, and his only defeat here was in last season’s showpiece against John Higgins.

Having beaten Neil Robertson and Higgins in the group stage, O’Sullivan found himself 2-0 down in the early stages of his semi-final as Hamilton twice took advantage of ‘The Rocket’ accidentally knocking in a colour. O’Sullivan hit back in the third with a 124, his 899th career century and drew level in time for the mid-session interval with a 74.

When the players returned O’Sullivan marked his latest career milestone with a 109 break to take the lead for the first time in the match, and he didn’t look back from there. A 68 break in the seventh put him one frame from the final, and

“It will be my fourth final in four visits, two wins and one loss last year,” said O’Sullivan. “Of course it would be nice to win, but I just want to enjoy it. I think I play best when I am relaxed and sometimes you get a bit tense and tight out there and you lose the flow, so the more relaxed you are the stronger your flow.

“To reach 900 centuries is a big milestone and the crowd enjoyed it. I will be trying to get to the 1,000 as quickly as possible.

“Luca and Shaun Murphy are both fantastic players and I would pay to watch that game tomorrow because they are both great, attacking players.

“I will go home tonight, have a day at home, come back tomorrow night and on Sunday go out and have faith in my own game and hopefully come in and have spells where I have spells where I am strong in the match and try and dominate, and when I am not so strong try and limit the damage.”

O’Sullivan will face either Shaun Murphy or Luca Brecel in Sunday’s best-of-19 final, with his opponent to be determined on Saturday evening.