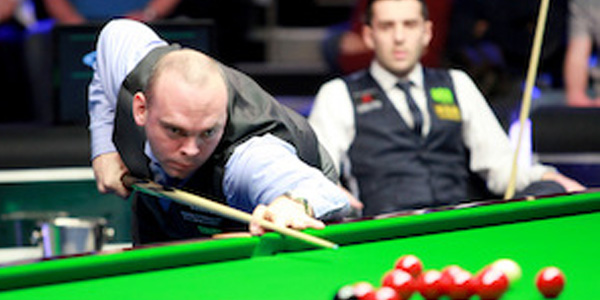 STUART BINGHAM is the first man through to the final of the 888casino Champion of Champions as he came through a hard-fought encounter to beat Mark Selby 6-4 at the Ricoh Arena in Coventry. The Essex man, who has established himself at the top level over the past two seasons, qualified for the tournament by virtue of winning the final edition of Premier League Snooker and will be contesting his fourth major final in 18 months.

The pair shared the opening two frames before Bingham reeled off three straight frames, including a 73 in the fourth, to put him in a strong position at 4-1 ahead. Selby though, dug in and fought back to square the match at 4-4 and give himself a great chance.

Bingham then took the 35 minute ninth frame before a run of 56 followed by some excellent safety play closed out the match for a 6-4 win. He will face the winner of Ronnie O’Sullivan and Neil Robertson in tomorrow’s best of 19 frame final and his battling match play will stand him in good stead.

Commented Bingham, ‘I just tried to keep my composure. There were a couple of times when I got a bit distracted, a few phones went off that cost me a couple of frames but I just seemed to fall over the line in the end.

‘It wasn’t great snooker from me or Mark, I maybe had some semi-final nerves but I’m just happy to get through.

‘I was 5-1 up to Mark in the Masters and he came back and beat me so when he got to 4-4 from 1-4 down I thought he was going to come back and nick it. I was getting in first near enough every frame so I thought I’ve just got to take my chance.’

Bingham attributed his transition to the top level to technique; ’I’ve been working with a guy called Steve Feeney and his SightRight and it’s just down to that. It’s getting me more accurate and when I’m under pressure it produces so I think that makes a big difference.

‘It’s that little bit of self-belief to produce when it matters. I’ve played Mark many times and beat him a few times and I’m not afraid of anyone and just get on with it.

‘It’s going to be very very hard to beat Ronnie, I’ve only beat him once in ten years so I know I’ve got my back against the wall. I’ve got a pretty good record against Neil, I beat him in the Premier League last year and he’s beaten me a couple of times but he’s World No.1 for a reason but whoever it is I’m going to enjoy it.

‘This is a great venue, the table is running beautifully and there was a great crowd today. I’m going to stay up here tonight watch some of the other semi-final and then watch Froch v Groves.’

For Selby, it was a disappointing afternoon, ‘Overall I didn’t deserve to win and I don’t think I played well enough to win,” he said.

‘Stuart obviously played a lot better and scored better but it was strange game as at the interval I was 3-1 down and I didn’t feel I had a clear cut chance to get in.

‘Every time I broke off Stuart potted the long red as a shot to nothing and more or less got in first every frame.

‘At 4-4 I’m still in the match and I’ve got a chance but I didn’t really feel I was clear cut in the balls except that one frame really.

‘The last few weeks have been good; I’ve won in Antwerp which gave me some confidence coming here and I’ve got to the semi-final. I didn’t really perform today but I’ll be back on the practice table ready for the UK next week. I’ll keep putting the hours in, practising and working hard,” he added.

The 888casino Champion of Champions is a brand new event featuring winners of all major tournaments over the past 12 months. The players are grouped into four groups of four and contest semi-finals and then a final all on the same day.

The winners then move forward to the weekend where there are two semi-finals on Saturday followed by the final on Sunday 24th November. The total prize-fund is £270,000 with £100,000 going to the champion.