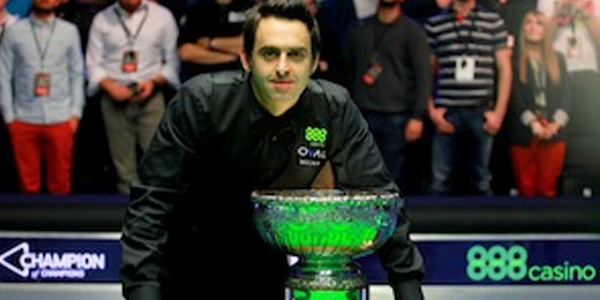 Battling Ronnie shows who is the Champ

RONNIE O’SULLIVAN put in another superb match play performance as he held off Stuart Bingham down the closing stages to claim the 2013 888casino Champion of Champions title and a cheque for £100,000 after an exciting 10-8 win at the Ricoh Arena, Coventry.

The World Champion, who has slumped right down the world rankings due to inactivity, showed that he is still the man to beat as he came through a star-studded field to claim snooker’s newest title.

O’Sullivan had come through his group stage on Friday with a 4-0 win over Mark Davis and then a superb 6-5 victory over Ding Junhui in an outstanding encounter. That put him into Saturday’s semi-finals where he once again dug deep to beat Neil Robertson in the deciding frame.

That set up Sunday’s best of 19 frame final against Bingham who had qualified for the event by virtue of his Premier League title a year ago.

A delighted O’Sullivan said, “It has been brilliant, the facilities have been good, the venue has been great and it has been a great three days and I have really enjoyed it.

Bingham has developed into one of the game’s grittier players and is the toughest of propositions for anyone and so it proved in the final. Played over two sessions, the afternoons frames saw Bingham take a 5-4 lead into the evening as recorded two centuries and won a couple of close ones.

On the resumption, O’Sullivan stormed out with a break of 93 to level things at 5-5. Bingham missed a black off the spot to give O’Sullivan a great opportunity in the next and he eventually took advantage to move into the lead for the first time the third frame.

That didn’t last long though as Bingham stole two close frames to regain the lead at 7-6 but 30 minutes later it was O’Sullivan who went 8-7 to the good following breaks of 62 and 96. Bingham though hung in as he made it 8-8 with a break of 66 to set up a climactic finish.

O’Sullivan took the next before breaks of 33 and 49 saw him clinch the title as the sell-out crowd of 700 cheered him home.

“Stuart has had a great tournament and another good season and I am just pleased to have got the victory, that is all you can hope for,” said the Rocket.

“Whether you play well or not sometimes you just have to grind out a result and that is what I managed to do here today. It was ebb and flow all the way, at one stage I didn’t think I was going to win it because I thought he was playing freer snooker but I managed to hold it together in the end.

“I think sometimes when you get near the winning line you have to make it happen. I learnt my lesson years ago against Stephen Hendry, where I maybe played a couple of negative shots in the latter stages of the game and he didn’t, he took the bull by the horns and for me that was one of my biggest lessons in snooker.

“I knew then that if I was to become a regular winner of tournaments I needed to have the same philosophy. At the end of the game I always think this is the time you need to make it happen.

“I played okay against Ding and Neil but we both struggled a bit today. It wasn’t terrible but I have not played as well this week as I have done over the last couple of years but that is for me to get back on the practice table,” he added.

Bingham can take consolation with the £50,000 runners-up cheque and the fact that only a player of O’Sullivan’s outstanding ability ended his run in the tournament.

“It’s great to be in a final with Ronnie,” said Bingham. “It was a good day, neither of us played spectacularly but it was good for the crowd, they have been fantastic all week. It has given me a lot of confidence for the UK Championship next week.