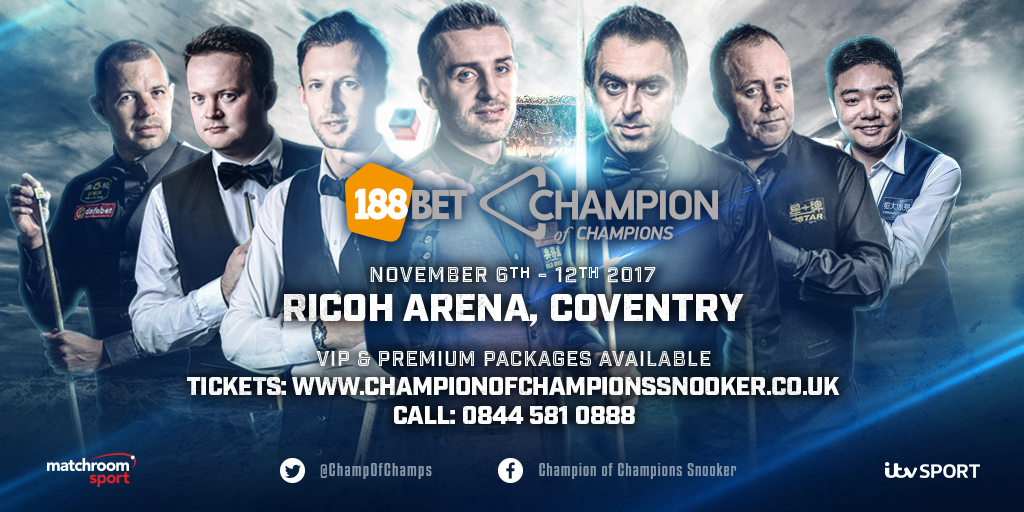 The tournament begins with four groups, each featuring a semi-final and final on the same day with the group winners progressing to the tournament semi-finals on Friday 10th and Saturday 11th November. Sunday’s final will be played over 19 frames with the winner taking home £100,000.

In addition to live coverage throughout in the UK, the 188BET Champion of Champions will also be aired on CCTV in China, Sky New Zealand, OSN throughout the Middle East, StarHub in Singapore and Now TV in Hong Kong.

Barry Hearn, Chairman of Matchroom Sport, said: “We are delighted once again to be working with 188BET on what is one of the biggest events on the snooker calendar. The 188BET Champion of Champions is a blue riband event and the millions of fans watching both in person at the Ricoh Arena across the world on live TV will be in for a treat of world class snooker from the first ball till the last.”

188BET’s Managing Director, Nigel Singer said: “I’m pleased to announce 188BET’s partnership with Matchroom Sport. The Champion of Champions snooker tournament is one of the biggest events on the snooker calendar. Through our partnership, the 188BET Champions of Champions tournament will reach millions of snooker fans with live television coverage on multiple channels.”

The sponsorship was brokered by independent sports and entertainment marketing agency, CMSeven.

188BET is a leading online bookmaker licensed and regulated by the UK Gambling Commission and the Isle of Man Gambling Supervision Commission. 188BET offers betting in multiple languages on a wide range of products including Sports, E-Sports, Horse Racing, Financials, Progressive Slots, Casino, Poker and many more.

For more information about 188BET go to www.188BET.com