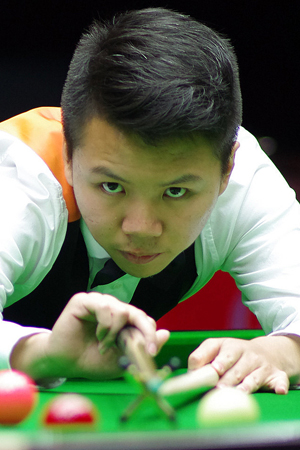 Chinese prodigy Zhou enjoyed some promising results during his debut season on the World Snooker Tour in 2014/15. He reached the last 32 of both the International Championship and the China Open, and climbed to 75th in the world rankings.

But undoubtedly the highlight of his career so far was partnering Yan Bingtao to victory at the 2015 Nongfu Spring World Cup in Wuxi. The two teenagers – aged just 17 and 15 – made up China’s B team and stole the show at the 24-team tournament.

After coming through a tough group which included England, Thailand and Ireland, they went on to beat Australia and Wales to reach the final, then scored a stunning 4-1 win over Scotland’s John Higgins and Stephen Maguire.

Zhou qualified for the pro tour by winning the IBSF World Championship in December 2013, at the age of just 15, beating Zhao Xintong 8-4 in the final in Latvia.